The Shergood Steamly S2-S is a single-engine steam-turbine powered helicopter. It employs a closed-loop steam system consisting of a boiler, a steam turbine, a condenser and a water reservoir. A fuel oil burner in the boiler provides the heat to produce steam which is then directed into the turbine through the throttle valve. Steam exiting the turbine is passed through a condenser with twin engine powered cooling fans.

The maximum gross weight is 2,100 pounds. 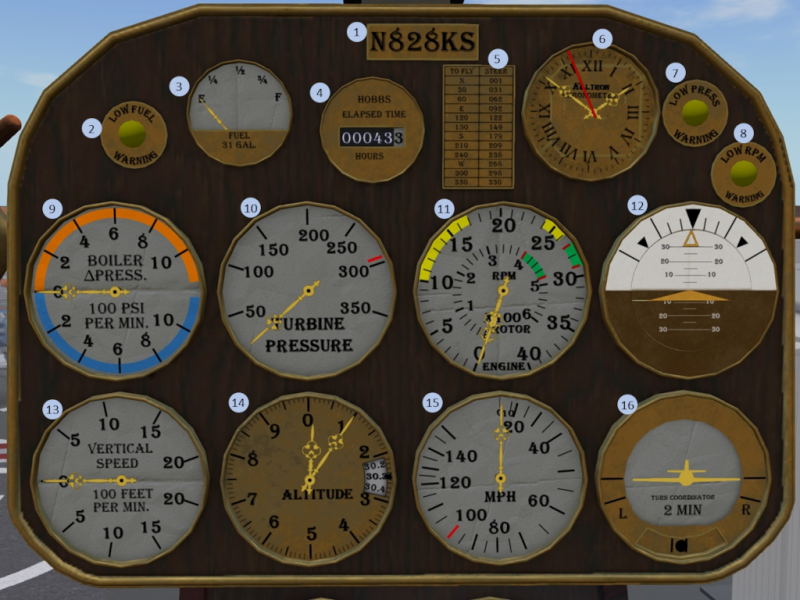 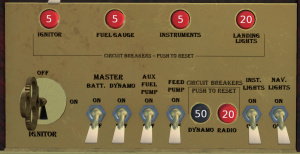 A switch panel is located at the bottom of the instrument panel and contains the majority of the switches and breakers in the aircraft. Left to right the switches are:

A magnetic compass (Figure 4) is mounted on top of the main instrument panel. Note that the magnetic compass is only accurate in straight and level flight and is subject to the following types of error:

A flashing beacon is mounted on the belly of the aircraft. The beacon is activated through a switch (Figure 5) mounted under the pilot seat.

A rotor brake lever (Figure 6) is mounted under the pilot seat. The rotor brake is on when the lever is in the up position.

The rotor configuration of this helicopter consists of a single main lifting rotor system and an anti-torque tail rotor system. Both systems are driven by the engine through the transmission system and are controlled by the flight control system.

The main rotor system consists of the main rotor hub and three main rotor blades. Each should be inspected separately during the pre-flight inspection. The main rotor is controlled through a swash plate and control linkages connected to the collective and cyclic controls in the cockpit.

The tail rotor is mounted on the right side of the vertical stabilizer. It acts to counteract torque from the main rotor and provide yaw control of the aircraft in a hover, and coordination for turns at cruise speed. The tail rotor is controlled through anti-torque pedals in the cockpit that alter the pitch of the blades thus increasing or decreasing the tail-rotor thrust. 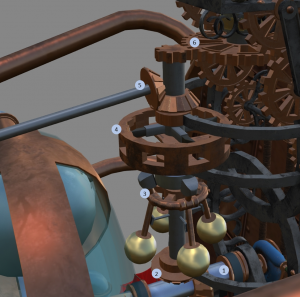 The S2-S has a fixed skid-type landing gear system with left and right skids mounted on shock absorbing pivots. 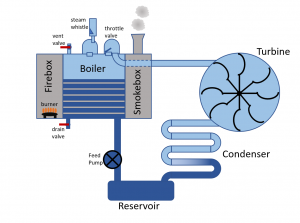 The S2-S is powered by a 200 HP steam turbine engine with a closed-loop system (Figure 8). A boiler provides steam pressure which is feed to a steam turbine through a throttle valve. Steam from the turbine passes through a condenser to a water reservoir, which is then pumped back to the boiler via a feed pump. Each of the components are described in further detail in the following sections.

The main source of steam for the S2-S is a boiler is mounted in the rear of the engine compartment. The boiler consists of three sections, a firebox, a smokebox and the main boiler compartment. The firebox takes up the portion of the boiler on the right side of the aircraft and contains a burner fed by a fuel-oil line, and an ignitor to begin combustion at start-up. The smokebox on the left side of the aircraft collects the hot gasses from burner and channels them to the smokestack. A set of tubes passing through the main boiler chamber connects the firebox with the smokebox. It is important that the tubes remain submerged in water while the boiler is operating. The water level should never be allowed to fall below 90% capacity while operating.

Under normal operation, the pressure in the boiler chamber should be maintained between 300 and 400 psi. This pressure acts as an energy reservoir which can be directed to act on the turbine through a throttle valve. If the boiler pressure is allowed to fall bellow 300 psi, then there will be insufficient pressure to produce full power which can result in loss of rotor RPM when high power is demanded of the engine. Excessive boiler pressure, on the other hand, can lead to failure of the boiler pressure vessel and subsequent loss of the aircraft.

The burner (Figure 9) is located on the right side of the aircraft and can be accessed for inspection through a door on the side of the boiler. The burner is the primary source of heat for the boiler. A fuel flow lever in the cockpit controls the flow of fuel to the burner, and thus the rate at which heat is added to the system. An ignitor is used to start the flame for start up. While once the burner has started, the ignitor is no longer needed to maintain the flames, it is recommended that the ignitor be left on to facilitate reignition in the event the flame is extinguished.

WARNING: Never introduce fuel to the burner with the ignitor disengaged. The resulting fuel build-up can result in an explosion once an ignition source is later introduced.

A toroidal steam turbine is mounted in front of the boiler. The turbine has an throttle valve regulated input port on the top, and a steam exhaust port connecting to the condenser on the bottom. A horizontal drive shaft extends from the center of the turbine toward the front of the helicopter.

Steam from the turbine is passed through a condenser, cooled by two engine-driven fans. 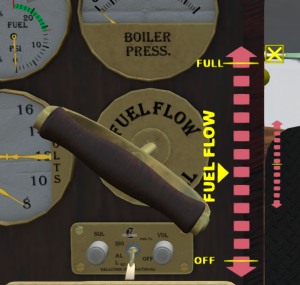 A fuel flow lever (Figure 10) mounted on the mid console is used to regulate the flow of fuel to the burner. Increasing the fuel flow will increase the temperature of the firebox and thus the rate of heat being transferred to the boiler. During flight, fuel flow should be adjusted as necessary to keep the boiler pressure between 300 and 400 psi. Once the boiler pressure is near the desired level, the boiler pressure differential gauge can be used to fine tune the amount of fuel needed to maintain pressure.

In order for fuel to flow in response to the fuel flow lever, the fuel cut-off must be open, and at least one of the fuel pumps (engine-driven, or electric) must be operating. The engine-driven pump is active anytime the engine RPM exceeds 50%. The electric auxiliary pump is operated through a switch on the main panel in the cockpit and is required for starting.

To operate the fuel flow lever, you can: 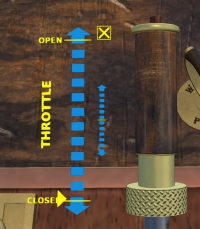 The throttle can be operated by one of two methods:

Manual control of the throttle is generally only required during start-up and shut-down. Once at full operating speed, the governor is used to maintain proper RPM by automatically increasing and decreasing the throttle as needed.

A steam whistle that can be operated via a cable and pulley system is mounted on top of the boiler. A handle (Figure 12) on the floor of the cockpit is used to activate the steam whistle through a cable and pulley system. The whistle will operated when the handle is in the up position. The whistle can be used as an audible signal to nearby personal on the ground, or to assist in reliving excess pressure in the boiler.

When active, steam from the boiler is allowed to escape through the whistle. Extended use of the whistle will reduce pressure in the boiler over time, unless fuel flow is increased at the burner. For this reason, its use in flight is discouraged when pressure is below 300 psi. Conversely, opening the whistle in addition to reducing fuel flow can be used to more quickly reduce boiler pressure when the 400 psi limit has been exceeded.

The whistle is operated by clicking or using the chat command:

A red fuel cut-off lever (Figure 13) is mounted under the pilot seat. Fuel flow to the burner is on when the lever is in the horizontal position. The fuel cutoff is operated by clicking it, or using the chat command:

A vent valve (Figure 14) is located on the of the boiler vessel. This valve is used during startup to vent air from the boiler chamber to ensure that the chamber contains only steam during operation. The vent valve is operated by clicking it, or using the chat command:

CAUTION: Failure to vent the air from the boiler before operation will increase the temperature needed to achieve operating pressure and reduce the efficiency of the boiler.

CAUTION: Failure to periodically drain water can result in reduced performance and corrosion to engine parts. 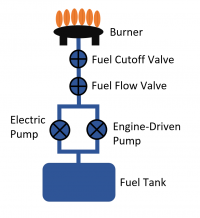 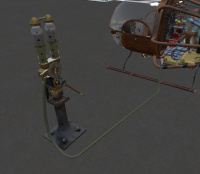 The aircraft has a 31 gallon brass bladder tank mounted on the underside of the helicopter. The burner normally consumes approximately 12 gallons/hour at cruise speed. Fuel pressure to the burner is provided by two fuel pumps mounted in parallel feeding from the main tank. One fuel pump is engine-driven and provides effective pressure when the engine RPM is at least 50% of operating speed. The second pump is electrically operated and controlled through a switch in the cockpit. A fuel pressure gauge, part of the Triple-Gauge on the mid console, shows the current fuel pressure at the output of the pumps.

The S2S is designed to operate on medium fuel oil, but Jet-A can be used in the event that fuel oil is not available. 100LL should never be used. Use of 100LL will result in fuel contamination and significantly reduced available power. If the aircraft is accidentally fueled with 100LL, the tank should be completely drained and refuel with proper fuel before the next flight.

The tank can be refilled using either the included retro fuel oil pump, or a standard KellyFuel pump.

To use the retro fuel oil pump, using the following procedure:

The tank can be refueled using the KellyFuel System, or by using the "refuel" chat command as follows: 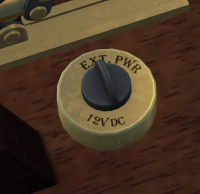 An external power connector (Figure 17) is located in the left rear of the passenger seat. To recharge a low battery, open the passenger side (left) door, click the port to remove the cover, then connect the manual dynamo included with your helicopter.

The helicopter is controlled by changing the pitch of the blades collectively or cyclically. Pitch changes are made through the flight controls which include a collective, a cyclic control stick and anti-torque pedals. The pilot and copilot controls are interconnected and move together. The collective increases the pitch of all blades, controlling the helicopter vertically. The anti-torque pedals control the pitch of the tail rotor, thus changing the tail rotor thrust. The cyclic imparts unequal pitch around the blade disk to redirect thrust laterally or longitudinally. See SECTION 1 - General for details on the Second-Life control options for the controls.

All lights operate on the DC bus and can be powered by the battery or generator. The available lights are: