Weather is an important factor that affects many aspects of flight. Preflight preparations, should always include a review of current and expected weather conditions along the route of flight. Select Shergood aircraft include support for advanced weather (Weather 2.0) which make them capable of simulating and responding to numerous weather aspects.

Weather in aircraft supporting advanced weather can be set to dynamic or static mode. Dynamic weather is enabled by turning on the "Dyn. Wx" option from the @Options menu in the helicopter for helicopters that support it. The two modes are described below.

When dynamic weather is enabled, weather conditions are periodically queried from the Shergood Weather Simulator (SWS). SWS simulates grid-wide weather patterns with charts and data that can be queried at http://www.shergoodaviation.com/weather.php . Each time the aircraft enters a new region, it will query the SWS server for the weather conditions in that region including temperature, humidity, winds, altimeter setting, cloud bases and visibility. These conditions will affect the handling and behavior of the aircraft.

In cold weather conditions, ice has the potential to adversely affect flight by:

Ice is most common when outside air temperature is between -10C and 0C, and visible moisture is present either through precipitation or high humidity. Below -10C, any moisture present is generally already frozen and does not pose a danger in adhering to the aircraft. It is the responsibility of the pilot to carefully inspect the aircraft before flight and remove any ice present.

Some aircraft include features to allow them to operate to some degree in icing conditions. These features include:

Ground deicing should be performed before flight to remove any ice adhering to aircraft surfaces and/or provide ice protection during ground operations. This is normally performed through the use of deicing fluids applied to the aircraft. Deicing fluids come in a variety of types as described in the table below.

Each fluid is identified by a specific color, and is characterized by a HOT (Hold-Over Time) and minimum rotation speed. The HOT is the time for which the ice protection will last after applied, and the minimum rotation speed is the airspeed at which the fluid will shear/blow off. Using a fluid with too high a viscosity can result the fluid not shearing off before takeoff and producing undesirable aerodynamic effects.

Shergood helicopters are certified for use with Type 1 and Type 3 deicing fluids. When using a Type 3 fluid, it is recommended that the pilot achieve a forward speed of at least 60 knots before leaving ground effect.

This section describes the weather as generated by the Shergood SL Weather simulator. While intended to mimic many of the features of RL weather, it is a simplified model and does not include all the effects of RL weather. The simulator is based on conditions at mid-latitudes in the Northern Hemisphere of RL Earth. This results in Weather systems that generally move West to East, and winds that generally rotate counter-clockwise around low pressure systems.

What we feel as air pressure, is from the weight of the atmosphere around us. The atmosphere is a mix of gasses comprised of approximately 78% nitrogen, 21% oxygen, and 1% other trace gases that reaches up to approximately 350 miles above the surface. If we were to weight a 1 inch square column of air reaching for from the sea level to 350 miles above the surface it would weigh approximately 14.7 pounds. This results in a sea-level pressure of approximately 14.7 pounds/square inch. If one is above sea-level, either at an airport above sea-level or in flight, the weight of the air above that point is less. This is the principle upon which altimeters work.

The actual pressure at a station also depends on the elevation. Pressure drops by about 1 in. Hg for every 1000 feet of altitude. This means that on a standard day, the pressure at a station at 5000 feet would be 24.92" Hg. When stations report pressure, they typically adjust it to sea level sea-level equivalent. For example if the actual recorded pressure at an airport at 5000 feet elevation was 25.25" Hg, this would get reported as 30.25" Hg. This allows pilots to have a consistent understanding of reported atmospheric pressure without needing to know the elevation of the station.

Differences in pressure drive much of what we experience as weather. These differences in pressure are caused by unequal heating of the surface resulting in what we experience as wind. Initially, air moves from high to low pressure areas, but as it does so, it will deflect to the right due to Coriolis effect from the rotation of the Earth. The result is the air will tend to flow clockwise around high pressure systems, and counter-clockwise around low pressure systems.

However, using the RL lapse rates above result in cloud heights that are too high to be interesting for SL, since flights generally occur at much lower altitude in SL compared to RL. For this reason, we reduce the calculated cloud height by a factor of 10 for the purposes of SL. 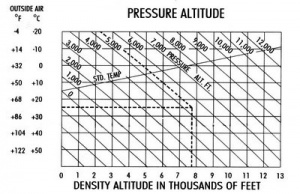 Pilots should be mindful that in hot and/or humid weather, performance will be decreased due to the increased density altitude. It will require more power/collective to hover, and more power will be required in cruise. Pilots should be aware of the different types of altitude and how they affect performance:

To a lesser extent than temperature, high humidity can also have an effect on performance as well, particularly in combination with high temperatures. A small buffer should be added to the calculated density altitude when humidity is high.

Preflight preparations should always include a review of current and expected weather conditions along the route of flight. Shergood systems provides two methods for accessing SL weather information: 1) The Shergood Weather Services site and 2) Over the radio via ATIS broadcasts.

A METAR is an observation of current surface weather reported in a standard format. This discussion of METAR covers elements used in Second Life. METARs are issued on a regularly scheduled basis. The elements of a METER are listed in a standard order which we illustrate through the following example:

The meaning of each of the elements are as follows:

METARs for most airports can be found at the Shergood Weather Services site. On the METAR tab, enter the identifier codes for one or more airports and press "Get METAR Data". The current METARs for the requested locations will be shown below. METARs for a specific location can also be found on the Shergood Map. Click on an airport symbol to bring up its information box, the click on the "METAR>>" link to expand it into the current METAR for that location.

These weather products are available at two scales "mainland" showing all of SL mainland, and "Blake Sea" showing a closeup of the Blake Sea, Nautilus, most of Corsica and the Northern portion of Satori.

ATIS (Automatic Terminal Information Service) is a pre-recoded message containing current weather information about an airport. It is usually broadcast over a specific frequency for each airport. The frequency can be found in the information box of an airport by clicking that airport's symbol on the Shergood Map. See the documentation for your aircraft on how to select that frequency with your radios.

The message includes the following pieces of information: