When the engine fails, the freewheeling unit, or sprag clutch, automatically disengages the rotor system from the engine. The sprag clutch will disengage any time the engine rpm is less than the rotor rpm, similar to coasting on a bicycle.

As soon as a loss of engine power is detected by the pilot, the pilot must fully lower the collective as soon as possible (within a 1-2 seconds). This reduces the pitch of the blades allowing autorotation to occur. If the pilot delays lowering the collective, rotor RPM may decay to the point where recovery is impossible. In general, once rotor RPM falls below 80%, it may be impossible to recover RPM and a catastrophic landing is inevitable.

Once in an autorotation, the pilot may control the aircraft with the cyclic and pedals as normal to maneuver the aircraft to a suitable landing location. Use forward and backward cyclic for airspeed, and left/right cyclic to turn. Descent rate at 0 knots forward speed will be the highest, the descent rate minimized at 50-60 knots. While the pilot is free to manage airspeed as necessary to reach a touchdown during autorotation, the pilot should target a forward speed of 60 knots just prior to touchdown.

The recommended altitude for practice autorotations is 500 feet AGL. Recommended procedures are as follows:

Frequently, the optimal touch-down point will not be directly in front of the helicopter at the time of an engine failure. The pilot will need to maneuver the helicopter to a position from which a safe autorotation can be completed. Most of the same procedures that apply to straight-in autorotations apply to autorotations with turns. One additional factor that may apply when turning is that the increased load factor will cause the rotor RPM to increase. For this reason, the pilot must pay extra attention to rotor RPM and be prepared to lift the collective slightly during the turn to prevent overspeeding.

The recommended procedure for a practice 180-degree autototation is as follows:

1.3 Autorotations from a Hover

A power failure in a hover requires a different technique called a hovering autorotation. To practice this technique use the following procedure:

Practice hovering autorotations from a medium height hover. The apply the following procedures:

The goal should be to set down softly with little or no change in direction. 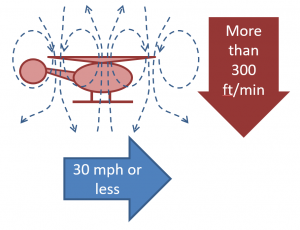 Vortex ring state (Figure 2), sometimes called "settling with power", is a dangerous condition that can occur when a helicopter is descending into its own downwash. Essentially a vortex ring system engulfs the rotors and they fail to produce lift. Once in vortex ring state, increases in power in an attempt to slow the descent will only make the condition worse, thus actually increasing the descent rate. If the condition is allowed to develop too far, or you are too close to the ground, it may be impossible to recover. You are at danger for vortex ring state when all three of the the following conditions hold:

If you have alerts turned on, your helicopter will alert you when you are in vortex ring state. To recover from vortex ring state, you should lower the collective and apply forward cyclic to regain airspeed. However, the best practice is to avoid it in the first place.

When practicing recovery from vortex ring state, choose a high enough altitude that a recovery can be made before ground contact. Try to enter the maneuver at least 1000 AGL. Then use the following procedure:

Retreating blade stall, which occurs when airflow over the retreating blade becomes to low causing that side of the rotor disk to stall, was first discussed in SECTION 2. Aerodynamics - Retreating Blade Stall. It usually occurs at high airspeeds and is usually the determining factor in the maximum airspeed of the aircraft. In helicopter with counter-clockwise turning rotors, the retreating blade will be on the left side of the rotor disk. As the stall deepens, there will be a rapid decrease in overall left, and a rapid roll to the left. The natural impulse will be to apply right cyclic, but this is the incorrect response.

The correct response when retreating blade stall is inadvertently entered should be to simultaneously:

In general, the pilot should avoid entering retreating blade stall by paying attention to the airspeed limitations of the aircraft.

Low rotor RPM blade stall differs from retreating blade stall in that it can happen at any airspeed. Low rotor RPM is usually due to pilot mismanagement of the available power, or failure to react quickly to loss of power. As collective pitch is increased, the amount of power needed to maintain sufficient rotor RPM also increases. If the available engine power does not meet the demand, the rotor RPM will begin to decay. If the rotor RPM is allowed to drop below about 80%, it may be nearly impossible to recover. For this reason, it is important for pilots to develop an awareness for their rotor RPM during flight.

In normal operation, engine power is usually indicated by a torque gauge (turbine aircraft) or a manifold pressure gauge (piston aircraft). A red line on the gauge usually shows the upper bound on the available power. The pilot should observe operational limits, as well as monitor rotor RPM during flight. In the event that a low rotor RPM condition is encounter inadvertently, the pilot should lower the collective and apply gentle aft cyclic to reduce the angle of attack of the blades and thus the power demand on the engine.

When such a failure occurs in cruise flight, the pilot should enter an autorotation (see Autorotations) and apply cyclic to maintain the normal autorotation speed for the aircraft (generally around 60 knots). Entering an autorotation will eliminate the torque from the main rotor and stop the spin. Maintaining forward speed will allow weather-cock stability to keep the aircraft oriented in the direction for forward movement.

The purpose of the governor or fuel controller is to regulate engine power so as to maintain a constant RPM. When the governor or fuel flow fails, automatic adjustment of the throttle will be inoperative, and manually control will be necessary. In general, manually throttle changes will be necessary when the collective changes. For this reason, any collective changes should be made as slowly as possible to reduce workload on the pilot. See the flight model for your specific version to see the procedures for manual throttle adjustment.

Many helicopters use a hydraulic assist system to reduce the flight control forces necessary to operate the aircraft. The hydraulic system is typically comprised of servos on each flight control, a pump (usually driven by the transmission), and a reservoir. A switch in the cockpit can be used to turn the system on or off. Furthermore, in some aircraft, there may be multiple redundant hydraulic systems.

When a hydraulic system fails, the forces necessary to control the aircraft will be greatly increased. The pilot should identify the affected system or systems and first try to restart it, and if not possible, shut down the affected system(s). Control inputs without hydraulic assist should be made as gradually as possible, and a shallow run-on landing is recommended.

A single engine failure in a dual-engine helicopter is often a non-event if handled properly. It is often possible to continue flight on the remaining engine to a suitable landing area. Pilots should refer to the helicopter flight manual for any airspeed or other restrictions that mat apply under single-engine flight.

The most critical aspect of handling a single-engine failure is ensuring the pilot correctly identifies and shuts down the failed engine. Shutting down the wrong engine is likely to end in disaster. Unlike most multi-engine airplanes, there is no telltale yaw to indicate the failed engine. The pilot must use the engine instruments looking for a loss of torque or RPM.