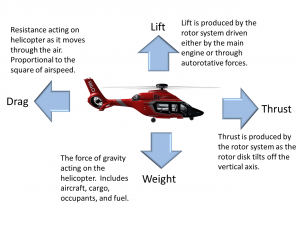 Figure 1: The Four Forces of Flight

1 The Four Forces of Flight

All aircraft are governed by the four force of flight (Figure 1): lift, weight, drag and thrust. When the opposing forces balance each other (lift against weight and thrust against drag) the aircraft will continue with in the same direction and velocity without acceleration. When two opposing forces are different, the aircraft will accelerate until it reaches equilibrium. It is the job of the pilot to control these forces in a way that results in a desired outcome.

Here is a closer look at the four forces in a helicopter: 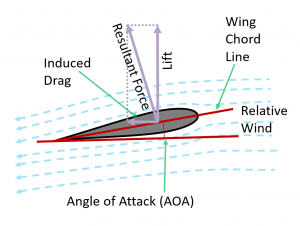 Figure 2: Lift Produced by the Airfoil

Every object in the atmosphere is surrounded by a has that exerts a static force of 2,116 pounds per square foot at sea level. When a rotor blade is not moving, that force is exerted equally over the entire blade surface, and thus no useful lift is produced. In a helicopter, this is done by forcing air over the blades through their rotation around a mast.

Figure 2 shows how lift is produced by an airfoil as it moves through the air. Lets take a look at some of the elements in the production of lift:

More specifically, the lift produced by an airfoil (e.g., a rotor blade) is governed by the Lift Equation:

The components of this equation are: 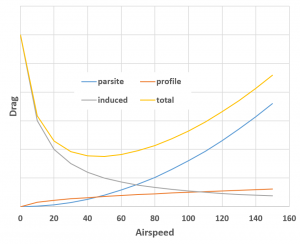 Drag is the force that resists the helicopter and/or rotor blades as the move through the air. Drag must be overcome by the engine to turn the rotor. Drag always acts parallel to the relative wind and total drag is comprised of three types of drag: profile, induced and parasite.

Profile drag is a mix of skin friction and form drag that results from turbulent airflow that is created as a structure moves through the air. Profile drag is a function of the smoothness of a surface, and the size/shape of the structure that protrudes into the relative wind. It is generally weakly correlated with airspeed.

Induced drag is generated by airflow circulation around the rotor blade as it creates lift. When an airfoil creates lift, some of the air is forced downward meaning that the relative wind is angled slightly above the horizontal plane. This results in a force that tends to slow the blades that increases as the angle of attack increases (i.e., with increased collective). Induced drag is the main reason that more engine power is required as collective is increased.

Parasite drag is the drag produced by all the non-lifting surfaces as the helicopter moves through the air (i.e., cabin, rotor mast, tail, landing gear). Parasite drag generally increases as the square of the the airspeed, thus doubling airspeed results in a 4x increase in drag. This means that a 4x increase in thrust is required to achieve a 2x increase in speed.

Total drag is the total of profile, induced and parasite drag (see Figure 3). Since induced drag decreases with airspeed, while parasite drag increases, there is generally an airspeed at which the lift-to-drag ratio is minimized. This point is referred to as L/DMAX and typically defines the best climb airspeed of the aircraft. In the example shown here L/DMAX is approximately 50 knots meaning 50 knots would be the best climb speed.

There are two parts to the relative wind as it passes through the rotor system:

As the pitch of the rotor blades increase, more air is forced down through the rotor system. This induces an downward flow of air which when combined with the horizontal motion of the blade through the air results in a relative wind that is angled downward relative to the path of the blade. This results in a decreased angle of attack, and this less lift. Induced flow is greatest during hover in no-wind conditions.

Proximity to the ground (land, water, or over a prim) interrupts the downward movement of air, thus reducing the effect induced flow. The effect increased the closer your are to the surface, and diminishes as you increase height over the surface. Ground effect decreases the power needed to hover.

Hovering near a surface is referred to as an IGE (In Ground Effect) hover. Ground effect permits the relative wind over the rotor blades to be more horizontal thus increasing their efficiency. Ground effect is increased when hovering over smooth surfaces, and decreased over grasses and other rough surfaces.

When hovering outside the range of ground effect (generally above a rotor diameter), the helicopter is said to be in an Out of Ground Effect (OGE) hover. Since you lose the benefits of ground effect in an OGE hover, it requires more power to maintain altitude. At high density altitudes, or in helicopters with less power, it may not be possible to maintain an OGE hover in some cases. Performing an OGE hover also presents the risk of entering vortex ring state if the helicopter is allowed to descend at too great a speed. See #VORTEX RING STATE for more information on vortex ring state.

Hovering is the most challenging part of flying a helicopter. This is due to the fact that the helicopter is inherently unstable and constant control inputs are needed to maintain a hover. Furthermore, all of these control movements interact with each other such that moving any one control usually requires moving another control as well. That said, the basic principle is relatively simple. The cyclic is used to eliminate horizontal drift, the pedals are used to maintain directional control, and the collective is used to maintain a constant height above the ground. 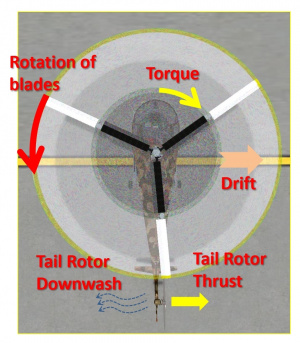 Since the helicopter is suspended from a single point well above the center of mass, it can have a tendency to rock like a pendulum. This is called pendular action and can be exaggerated by poor control technique. When a pilot begins overcontrolling, the pendular action can rapidly increase causing the helicopter to rapidly depart controlled flight. For this reason, it is important for the pilot to use small and smooth control inputs when flying a helicopter.

The spinning blades of a helicopter act like a gyroscope. One of the properties of gyroscopes is gyroscopic precession. Gyroscopic precession causes a spinning object to act 90 degrees in the direction of rotation from where a force is applied. For this reason, the controls on a helicopter are rigged such that the greatest blade pitch occurs 90 degrees before the highest point of the rotor disk.

As an example, consider a helicopter with counter-clockwise rotating blades. Pushing forward on the cyclic will cause the highest blade pitch to occur at the 9 oclock position on the left side of the helicopter. Gyroscopic precession will cause the back of the rotor disk at the 6 oclock position to tilt up, this vectoring some of the thrust in the forward direction.

In single main rotor helicopters, torque is produced by the main rotor whenever the helicopter is under power. In most aircraft, the main rotor turns counter-clockwise when viewed from above, resulting in the body of the helicopter having a tenancy to turn clockwise (to the right) the more power you use. As a result, the pilot must apply right pedal to compensate. This is particularly evident when pulling collective to lift into a hover which requires the most amount of power. Conversely, right pedal must be applied when reducing power/collective. A few aircraft (e.g., Russian and French) have main rotors that turn clockwise when viewed from above. In these aircraft, the effect is reversed and left pedal is needed to compensate as collective is increased. 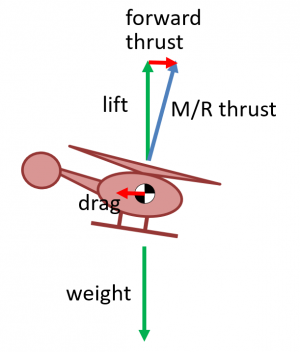 In straight-and-level, unaccelerated forward flight, lift equals weight and thrust equals drag. If lift drops below weight, the helicopter will descend until the forces are in balance again. The same will occur if lift increases above weight. Similarly if thrust increases above drag, forward airspeed will increase thus increasing drag until it exactly balances the new higher thrust.

Figure 5 shows the four forces of a helicopter in forward level flight at constant speed. When the rotor disk tilts forward, the total main rotor thrust (shown by the blue line) is angled forward perpendicular to the rotor disk. In this state, the main rotor thrust can be decomposed into a vertical (green) and a horizontal (red) component. Since we are in level unaccelerated flight, we know that the vertical component (i.e., lift) must equal weight, and the horizontal component (thrust) must equal drag.

As the rotor disk tilts forward more, the horizontal component increases resulting in higher forward airspeed. But since the lift must equal weight in order to maintain altitude, it is necessary to increase the main/rotor thrust as this happens. This is normally done with increased collective and is why more collective is required as forward speed is increased. 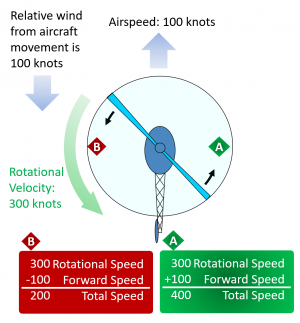 Dissymmetry of Lift is the apparent unequal lift on the two sides of the rotor disk in forward flight due to the unequal airflow over each half of the disk. Referring back to the example in Figure 6, we see that the advancing blade sees a relative wind of 400 knots, while the retreating blade sees a relative wind of 200 knots. Recall from Section 2.2 - Lift, that lift is proportional to the square of the relative wind. Since the relative wind on the advancing blade is double that on the retreating blade, that would suggest the lift on the right side of the rotor disk should be 4 times that on the left side. If this were true, the helicopter would roll violently to the left as forward speed were increases. Since this does not happen, there must be some other mechanism at play.

What is actually happening, is blade flapping. A hinge at the rotor hub, called the flapping hinge, allows each blade to move up and down. Blades will flap up on the advancing side, and down on the retreating side. The upward motion of the blade on the advancing side causes the angle of attack on that side to decrease, thus reducing the lift. Similarly, the downward motion on the retreating side increase the angle of attack, this increasing the lift on that side. The flapping of the blades allow the forces to balance exactly, equalizing the lift around the rotor disk. This normally happens automatically without any input from the pilot.

At approximately 15-20 knots, the helicopter completely overtakes the recirculating air and moves into clean air (Figure 8). This is referred to as Effective Translational Lift (ETL). As a helicopter passes through ETL, it requires significantly less power to maintain altitude, and more power is available for climbs. This is also the reason that less power is required in cruise flight than for hovering. It is also part of the reason that a normal takeoff involves a short ground run to accelerate past ETL before climbing out. 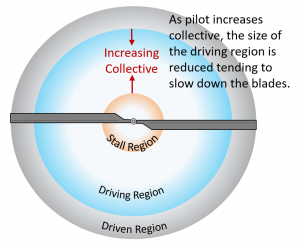 In autorotation, the blades of the helicopter are kept turning by airflow moving up through the rotor system, rather than by engine power. Autorotation allows a helicopter to land safely in the event of an engine failure. A freewheeling unit, or sprag clutch, allows the main rotor blades to continue turning without power from the engine. This is similar to the way a bicycle can coast without constantly turning the pedals.

Most autorotations are performed with forward speed. The pilot maintains this forward speed, typically around 60 knots, then conducts a flare just before touchdown, followed by lifting the collective to cushion the landing.