When you rez your aircraft for the first time, it will attempt to contact registration server and assign you a unique N-number. If for some reason the server cannot be contacted, the aircraft will retain the "N-TEMP" registration. You can attempt to register again either by rerezing the aircraft, or by going to the @REGISTER menu and selecting the [Register Now] button. When an aircraft has not been registered, the @REGISTER will be available on the main menu. Once the aircraft is registered, you can access the @REGISTER menu as a sub-menu of the @Admin menu. You can also request a different N-number through the @REGISTER menu. Select the [N Number] button and enter an N-Number request. The N-number must be in a valid format, and must not be assigned to another aircraft. Valid N-Numbers must begin with an "N", followed by 3 to 5 alpha-numeric digits (however, only the last two digits may be letters). Alternatively you can select one of several international registration formats such as L-LLLL or LL-LLL where the "L" are letters, or a militaty format with five numeric digits.

This aircraft supports two separate control schemes: Keyboard-based and HUD-based. The control scheme is set in the @Options menu. Regardless of the scheme selected, controls can also be moved through the HUD by pressing and holding the left mouse button and dragging the appropriate slider in the HUD. In both control schemes, some key commands are activated through gestures included in a box as part of the product carton. Key commands requiring a gesture are marked with a [G] in the key command lists below.

HUD control is designed to be used with the left hand on the WASD buttons, and right hand on the mouse controlling the cyclic in the HUD (by dragging the red dot on the HUD). It is also possible to use gestures for the JKLI buttons to control cyclic with the mode.

The default camera position is inside the cockpit with a view through the front glass. It is also possible to switch to an outside "follow cam" view by typing "cv" or wear the "cameraViews" gestures and use "p" key to toggle views. An additional overhead view can be selected with the "cv2" command. In addition, it is possible to fly in mouselook when using one of the keyboard based flight control methods.

Because of SL limitations, it is not possible to use the mouse button for both clicking on controls, and using it to modulate the Left/Right keys to be used for the anti-torque pedals. For this reason, most Shergood helicopters use the "mlt" chat command to toggle the functionality of the left mouse button between being used to click on controls, and being used for pedal control.

Note: Some common mesh attachments can interfere with MLT, if you experience issues with the aircraft not responding to touches in MLT, remove all mesh attachments and reattach them one at a time to identify the one causing it.

Chat commands may be issued on local chat, or on the channel /2973 for use in gestures.

Like all Shergood aircraft there is a command, "qstart", to start the helicopter quickly. In order to use this command, there must be someone sitting in the pilot seat. Note that the qstart command works by initiating a script that configures the helicopter for flight and does not instantly put the helicopter in a flyable state. The script includes pauses to wait for various systems to spin up to speed such as the APU, each engine and the rotor system. Once issuing the qstart command, it is recommended to wait for the rotor system to reach 100% before attempting flight.

The qstart command does not by default correct any failed systems. Some system failures may prevent the qstart process from completing. In this case, there will be a message in local chat informing that qstart has timed out. You can correct failed components either by clicking on the component or using the "Repair All" button from the "@Cheat" menu.

The "fc" chat command or "q" gesture toggles fine control mode for key commands. This can be useful when higher precision is need such as for making an accurate landing on a small platform. When in fine control mode, the effect of control keys are halved.

will increase the engine #1 throttle by 10%. You can also specify a specific throttle setting with a "/" followed by the setting in percent. For example:

will set engine #1 to idle speed.

In addition to the standard engine control levers, there are two emergency throttle levers. Emergency throttle chat commands begin with "ef" and the engine number (1 or 2) followed by a suffix for the action to perform with the lever. A "+" will increase the lever by 1%, and a "-" will decrease the lever by 1%. In addition you can add a "/" followed by the percent travel of the lever. For example:

will increase the Engine #1 emergency throttle by 1%, and:

will set the Engine #2 emergency throttle to 50%. 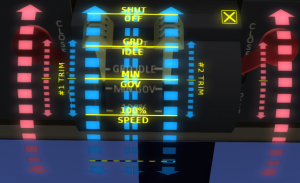 Engine control levers and emergency throttles are located on the forward overhead panel between the pilot and copilot seats. In normal operation, only the yellow engine control levers are used. To operate the levers, click in the general area of the lever to bring up the control overlay (see Figure 1). Once the overlay is active, clicking on one of the scales will move the lever under it to the selected position. To dismiss the control overlay, you can click the "X".

The blue scales in the center part of the overlay are used for the engine control levers. Clicking on one of the one of the wide blue scales will move the lever under it to the selected position. There are stops at "SHUT OFF", "GRD IDLE" (ground idle) and "MIN GOV" (minimum governed) positions. Above "MIN GOV", the engine control lever is analog and can be placed at any position to operate the engine at a specific RPM. A "100% SPEED" marking shows the approximate position for 100% RPM. In normal operations, RPM should be between 90% and 110%.

Next to each engine scale is a narrower "trim" scale. Clicking on the trim scale will nudge the engine control in the indicated direction relative to the center point. The further you click from the center point of the scale, the larger the nudge will be.

Between the two throttles is a paired scale. Clicking on this scale will move both engine control levers to the indicated position.

To move an emergency throttle, click on one of the red scales of the engine control overlay. The large scales move the throttle to the selected position, while the smaller scales next to it are for trim, nudging the throttle in the indicated direction.

The switch names can be used to control the switches from chat commands or gestures. The chat commands for the various switch types are described below.

The Pelican has a number of three-state "toggle" style switches (see Figure 3). The switch positions are numbered with "0" as the top position and "1" as the center position, and "3" as the edge positions. Toggles are moved by click over the area you want it to switch to, near the top for position 0, the center for position 1 and the bottom for position 2. They can be controlled with the following chat commands:

The Pelican has a number of three-state "rocker" style switches. The switch positions are numbered with "0" as the center position and "1" and "2" as the edge positions. Rockers are moved be clicking on one half of them. Each click moves it one position. Some rocker switches are "spring loaded" on one side or the other. For example the APU switch has an START, RUN and OFF positions with the START position being spring loaded. They can be controlled with the following chat commands:

Note that chat commands with spring-loaded switches will not automatically return to the center position. You must explicitly use an "s0" command after a delay. This is to allow you to control the delay in gestures.

Rotary switches have varying numbers of discrete positions and are controlled with a rotating knob. The positions are numbered start with zero at the most counter-clockwise position and increase in a clockwise direction. For example in the knob shown in the figure to the left the FWD setting is position 0, and the ALL setting is position 4. Knobs are moved interavtively by clicking on them. The side on which you click, relative to the indicating line, determines the direction of rotation.

Joysticks are controls that can be moved in any direction. Joystick commands will "nudge" the joystick in the specified direction with the joystick returning to neutral after a few moments.

The S61R is compatable with GTFO using the code KSPELICAN.

Weather chat commands can be used to set visibility conditions. When in IMC, the inside windows will be made opaque to simulate flight in fog or clouds. You can also set a "ceiling", the height of the cloud layer. This feature can be used in conjunction with the ILS approach system.