With a maximum main tank capacity of 2,650 gallons plus a 70 gallon foam concentrate reservoir, the Helitank is the ultimate in fire suppression technology for fighting HD fires. The Helitank also offers extreme versatility supporting both "coverage" and "salvo" drops. In "coverage" mode, the flow rate of water from the tank is dynamically controlled as airspeed changes to result in a constant density of water on the ground. Eight different coverage levels are supported. "Salvo" mode can be used when you need to get a lot of water to one place quickly, allowing you to dump up to the full contents of the tank at once. When combating multiple fires, pilot controls can also be used to select the drop size from 25% to a full drop.

2,650 gallons of water weighs a lot. 22,101 pounds to be exact. A full load of water nearly doubles the empty weight of the helicopter. As you would expect from a Shergood product, these weight effects are modeled. When fully loaded, the helicopter will handle noticeably slower and require more finesse than an empty aircrane. While filling, you will need to increase collective as water is drawn into the tank. And during a dump, the helicopter will balloon as the weight is suddenly decreased.

Foam increases the effectiveness of a drop on a fire. For an HD fire, a drop at the highest foam concentration doubles the effectiveness compared to water alone. Foam concentrate on the Helitank is held in a 70 gallon reservoir with a filler cap located on the top center area of the pod. The pilot can select the foam mixure level between 0% and 1% in 0.125% increments. This gives the crew the capability to trade off between fire suppression power and the how often the helicopter must return to top off the foam tank. A display in front of the copilot station shows the current level of foam. Foam can be refilled from 250 gallon totes. The totes keep track of the remaining foam level in them and so are "used up after a little more than 3 refills of the foam reservoir.

The main tank can be refilled from either scripted water, or from system water. Scripted water can be from either the SA Dip Tank, or by dropping the sa-water script into prim lake or pond.

Water can be drawn into the tank using either the pond snorkel of the sea snorkel. The pond snorkel can be used with both scripted and system water and is normally used from a hover. The tank can be refilled in approximately 60 seconds.

The sea snorkel can only be used with sytem water, and is normally used with forward airspeed. Unlike the pond snorkel which uses a hydraulic pump, the sea snorkel is powered only by the forward motion of the snorkel through the water. The tank can be refilled in 45 seconds using the sea snorkel.

The Helitank is designed to be compatible with the HD fire system. It can be used with HD fire v2016.06.21 or later. The Helitank is attached to the helicopter through the pod system and interacts with a control panel in the cockpit. It uses both DC electrical power, and hydraulic power from the hoist hydraulic system. The Helitank is operated through two panels in the cockpit. The first panel is mounted in front of the copilot station and includes an LCD display showing the quantity of water and foam concentrate in the tank. Above the LCD display are also two indicator lights. A green SYSTEM READY light indicates that the system is powered and ready for use. A red LOW PRESSURE light indicates that no hydraulic pressure is being supplied to the system, and normal pod functioning is not available. The second panel is located on the center console, also near the copilot station. The primary controls for the Helitank are located on this control panel.

To turn on the Helitank system, the POD PWR switch on the center console. This supplies DC power to the Helitank and the associated control systems. The pod ARM switch must also be engaged to operate the Helitank.

In addition to the main Helitank pod, the Helitank system includes a control console that is installed in the cockpit. The console must be installed separately before the pod can be used. To install the control console, use the following procedure:

Once the console has been installed, the Helitank pod can be attached/detached the same way as a normal pod as follows:

The Helitank also supports several toggle and rotary switches that can be activated through the standard chat commands (e.g., "s name" to toggle or advance the switch). The Helitank switches are:

When main compartment of the tank is empty, the red DROP/DOORS button (or the "p door" chat command) will toggle the tank doors between the full open and full closed state. A green light on the center console panel labeled DOORS CLOSED will illuminate when the doors are completely closed. The tank doors should be closed with the green light illuminated when filling the tank. When the Helitank is not in use, it is recommended that the doors be left in the open position to allow any residual water to drain and prevent rusting.

When using the pond snorkel with the dip tank, keep in mind that the water level of the dip tank will go down as water is drawn into the helitank. If the inlet is allowed to go above the water level, the flow of water will be stopped. To continue filling the tank, just lower the helicopter slightly to ensure the intake remains submerged.

The dip tank can be used as a source of water for the pond snorkel. It is also compatible with the KellBucket. Note however, that the dip tank that comes with the v1.0 of the KellBucket is not compatible with the pond snorkel. The dip tank has a capacity of 10,000 gallons. Clicking on the dip tank brings up the main menu. The main function of the menu is to set the water level. Select Level from the menu, then select the desired water level. The owner may also configure access to the water level menu. Access may be set to Owner, Group or Public.

The dip tank may also be filled with HD fire equipment. Directing any HD stream at the dip tank will add water to the tank. 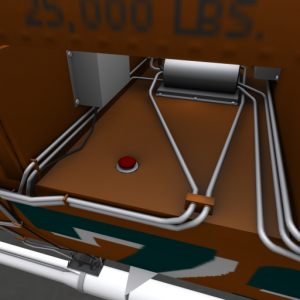 The foam reservoir can be refilled while on the ground by using SA Class A Foam totes. A foam tote should be rezed near the tank, and the filler cap removed. Clicking on the tote will bring up a menu with *Scan and *Level options. The *Level button will display the current quantity of foam in the tote. The *Scan button will scan for nearby foam reservoirs that are ready for filling. Note that if the filler cap is not removed, the tote will not be able to find it. Once the scan is complete, the tote will report the aircraft that are in range. Select and aircraft, and foam concentrate will be transferred from the tote to the aircraft. If a foam container is empty, a new full one can be rezed from the box. Full foam containers can also be obtained from a dispenser at the Shergood Aviation main sore.

In a salvo drop, water is dropped all at once, usually from a hover. To perform a salvo drop, the COVERAGE LEVEL knob should be set to the SALVO position. Press the red "DROP/DOORS" button, or use the "p drop" chat command to begin the drop. The quantity dropped can be a full load, or a partial load depending on the load size set with the QUANTITY knob. Note that the quantity dropped is approximate as it takes time for the doors to close and the computer must guess when to close in anticipation of reaching the target level. Also note that if a quantity setting would leave the tank less than 5% full after the drop, then the drop is treated as a full load drop. Note also that unlike partial drops that leave the doors closed after a drop, a full load drop will leave the doors open after the drop. In SALVO mode, the full load of 2,650 gallons can be dropped in about 4 seconds. When dropping a large quantity of water at once the rapid reduction in weight will often cause the helicopter to balloon after the drop. The pilot should be anticipate this balloon and not overreact. A drop in progress can be aborted by pressing the DROP/DOORS button again.

In a dynamic drop, the Helitank will adjust the water flow rate according to aircraft speed to achieve a constant "density" drop. The density is set with the COVERAGE LEVEL knob with settings between 1 (least dense) to 8 (most dense). Press the red "DROP/DOORS" button, or use the "p drop" chat command to begin the drop. During a dynamic drop, the doors will close completely when the aircraft is in a hover. As the aircraft speed is increased, the doors will open more so that the load will be dropped over the same horizontal distance traveled regardless of the aircraft speed. A dynamic drop in progress can be aborted by pressing the DROP/DOORS button again.

A 300 gallon/min water cannon is mounted on the front of the aircraft. The water cannon can be used with pure water, or with a foam/water mix in the same way as the main tank. The cannon can be hidden or shown with the "p hide cannon" and "p show cannon" chat commands. A CANNON toggle switch turns the cannon on or off. An angle selector can be used to adjust the angle of the cannon from 0 degrees (horizontal to the aircraft) to 15 degrees sloped down.

A full load of water weighs 22,101 pounds, not including the 1,931 pound empty weight of the pod. This extra weight substantially affects the handling of the helicopter. The pilot should expect the controls to be more sluggish and handling to be more difficult. Care should also be taken when using the AFCS. The pilot should be ready take over in the event that the AFCS has difficulty maintaining control. 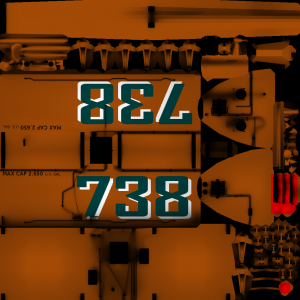 The helitank uses a single 1024x1024 texture for the main paintable surfaces. The paint can be applied using the SA paintkit for S64 pods. Base files for the Helitank are: