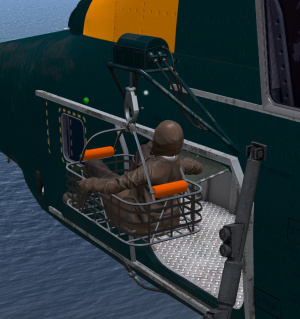 The S-58 is equipped with a rescue hoist mounted above the main cabin door. The hoist is powered by the utility hydraulic system with control circuits powered by the DC bus. A switch on the overhead panel labeled HOIST has positions CREW, OFF and PILOT to disabled the system, or give control the either the pilot or the crew. When the winch is not in use, it is recommended that it be kept in the fully retracted position with no load and the HOIST switch in the OFF position. This will disable the timer loop in the hoist script and reduce script lag.

The hoist is capable of being used with the following loads:

A load is generally deployed by clicking on it. For the rope and the harness, you can click on one of the bags in the storage area near the cabin door. The smaller yellow bag contains the harness, while the larger orange bag contains the rope. The rescue basket, stokes basket and forest penetrator are configured as a sit target as its default touch action, so a simple left click will result in sitting on that piece of equipment. If it is necessary to deploy rescue equipment while not sitting in the helicopter you can right click on it and select "Touch". If other rescue equipment is already deployed, the selected equipment will be swapped into the helicopter before the new equipment is swapped out. Clicking on the hook, will swap in all equipment. No more than 1m of cable should be deployed when swapping loads/out.

Warning: Due to SL physics limitations, the hoist loads must be kept at least 1 meter from any solid object or surface, failure to do so will endanger the aircraft 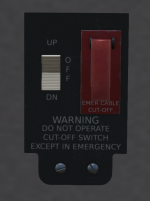 To use the pilot winch controls (see Figure 2), the HOIST switch on the upper panel must be set to PILOT. The hoist controls are located on the cyclic on a rocker switch labeled HOIST. Press the top part of the switch to move the hoist up, and the bottom part to move it down.

A pilot hoist shear switch is located on the upper console. This switch can be used in the event the cable becomes entangled and must be cut free to ensure the safety of the helicopter. The switch has a guard which must be opened before activating the switch. The shear switch is active regardless of the position of the HOIST switch.

The crew winch controls (see Figure 3) are located to the left of the main cabin door. The HOIST switch on the upper panel must be set to CREW position to utilize them. The controls consist of a press-and-hold rocker switch with UP, OFF, and DN positions. Press and hold the switch in the UP or DN position to move the hoist up or down, respectively.

The crew member occupying the hoist operator seat (kneeling by the main door), can also use key controls to control the winch. Use PgDown to lower the winch, and PgUp to raise it. These controls are only active when the hoist is in crew mode.

A crew hoist shear switch is located next to the hoist control. It is covered by a switch guard which must be opened to activate the shear. 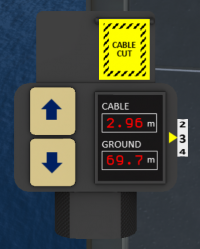 The winch HUD (see Figure 4) can be used to control the winch by any crew member in the the helicopter. In order for the HUD to be active, the helicopter must have hydraulic and electrical power, and the HOIST switch must be in the CREW position. The winch HUD has two buttons on the left side to raise and lower the winch. A digital display shows the current cable length and the current height above the ground. A dial on the right-hand side sets the winch speed. Finally an emergency cable cut button with a guard is located on the top portion of the HUD.

Unlike the baskets and harness, the rope attaches to a ring on the bottom of the winch. The rope can be used to quickly egress from the helicopter in a high hover to the surface. Click on the orange rope bag to deploy the rope.

Any passenger in the main cabin may use the rope by clicking on the rope or the winch body. This will position the user at the top of the rope in a rappelling pose. Use the down arrow to control descent. Once at the bottom, the user will automatically unsit from the rope and aircraft. 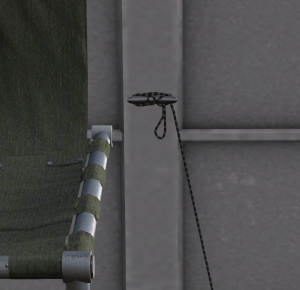 A cargo hook on the underside of the aircraft can be used to carry sling loads. Cargo loads are attached by crew members outside the aircraft while the aircraft is in a low hover.

The cargo hook is raised and lowered through a tiedown cleat in the main cabin (see Figure 5). Clicking the cleat will toggle the position of the cargo hook. The cargo hook must be lowered in order to attach a load, and the hook cannot be raised if there is a load on it.

The Cargo Hook system is controlled and monitored the cargo control panel(see Figure 6) and a release switch on the cyclic. Each of the elements has the following function:

2.3 Attaching Loads to the Hook

The CARGO SLING MASTER switch should be set to ON during load attachment and pickup to allow to the load to be released in the event problems occur.

Loads are normally attached by ground personnel while the pilot maneuvers the helicopter over the load. Use the following procedure to attach the load.

2.4 Flying with a Hook Load

Once a load is attached, the load will drag on the ground in non-physical mode until cables have stretched to their hang distance. When picking up a load it is important to pick straight up until the load breaks contact with the ground and is hanging freely. While flying with a load, the maximum allowed airspeed is 120 knots. It is also recommended to make sim crossings away from corners and as near to a right angle as possible. The CARGO HOOK switch should be set to SAFE once the load is airborne, until such time as the load is ready to be released.

The S-58 is packaged with a hook kit allowing you to build and share your own loads for the cargo hook system. The system is compatible with the Chinook hook load system, but since the S-58 only has a single hook, only load with a single loop can be used.

You can detach these from the built-in loads to create your own loads.

For each hook loop, you can include one to four cables and anchors. Edit the anchor to its desired position on the load, and the hook loop to its "resting" position to were it will be returned when the loop is not attached to a hook, and not held by an avatar. The cables may be placed anywhere and will be automatically adjusted when the script is dropped onto the load or reset. Note that the root prim should be positioned so that is is "right side up" (i.e., rotation other than z-rotation is 0).

Once you have edited the anchors and loops where you want them, drop in the script, or reset the script if it is already installed (simply pull the script from one of the included loads). The cables will arrange themselves to attach between a loop and one or two anchors. The closest two anchors to each loop will be used.

Several menu options are available for loads. The load menu can only be accessed by the owner and is brought up by clicking on an anchor. Available options are: