From
Jump to: navigation, search

The S-58/H-34 has 24 replaceable components with tracked lifetimes. Component lifetimes are tracked as a function of the HOBBS time of the helicopter. As a component ages, its failure rate will increase, increasing rapidly once its lifetime has expired. It is recommended that components be replaced at their individual lifetimes. In addition to the age of a component, excess wear is also tracked. Any mishandling of the aircraft (exceeding limits, etc) will result in wear accumulation by the affected component. Wear is not directly viewable but will affect the failure rate of the component, causing it to fail earlier than it might otherwise have failed.

Component times, wear and failure status are all synced with the Shergood servers. Whenever a new copy is rezed, the rezed helicopter will sync its component status with the server. Component times are synced by tail number, so if you have multiple tail numbers registered, each one will have its own set of component times. 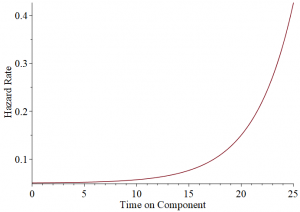 The base hazard rate is modified by the following factors:

The following table lists all of the repairable components, the nominal lifetime of each component in hours, symptoms of a component failure, and causes of excess wear on the component.

Most components can be inspected by clicking on them. When you click on such a component, a message indicating the general condition of that component will be displayed. The messages reflect both component age and wear. Besides a "damaged" message, the following status messages can be displayed based on the effective percent of lifetime of the component: 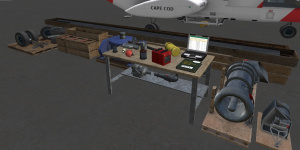 The S-58/H-34 comes with a maintenance workbench (see Figure 2) that can be used to monitor component times and replace components. Smaller components are laying on or under the table, while larger components are on palates or boxes near the bench. A logbook on the bench shows which aircraft is being worked on, and a laptop shows the time data for all helicopter components. Clicking on a component while the workbench is not connected to a helicopter will bring up a message indicating what it is. For example, clicking on the battery will display the message:

It is suggested that you familiarize yourself with all the components on the workbench by clicking on them. Clicking on any location other than a component will bring up the menu with the following options:

6.1 Connecting to a Helicopter

Pressing CONNNECT from the workbench menu will scan for nearby helicopters and give you a list by tail number. Select the tail number of the helicopter you want to work on. The selected tail number will be shown on the aircraft logbook sitting on the bench as well as on the laptop screen. 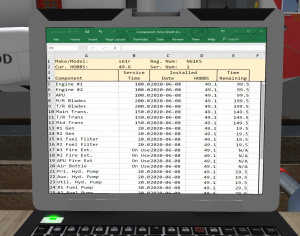 Once connected to a helicopter, the maintenance laptop (see Figure 3) will show the current times on all components. The laptop is implemented with prim media, so be sure you have media enabled and click on the laptop screen to see it. The header area at the top will show information about the connected helicopter including its make/mode, tail number, current HOBBS time and serial number. The rows will show the following:

Note that the list of items is scrollable. A scrollbar on the right can slide the component list up or down.

Before you replace a component, the appropriate access panels must be open. For example, to replace the #2 engine, you must open the panel for the #2 engine. Components are replaced by clicking on the component on the workbench. If only one type of that component is used in the helicopter, a menu asking you to confirm the installation will be posted. Click "Yes" to install the component. If the appropriate access door is not open, you will get a message such as:

Otherwise, the component will be replaced, and the component time data updated on the laptop. For component types that are used in multiple places, you will be shown a menu asking where that component should be installed. Select the location to replace the component.

IMPORTANT NOTE: Replacement parts are shipped without fluids. Be sure to add fluid to the component before first use, or you will be replacing it again very soon.

where XXXXXX is replaced with your tail number.