The S-58/CH-34 includes support for Weather 2.0 as described in The SL Helicopter Flying Handbook - Weather. The remainder of this section describe the various systems in the S-58 that support flying in adverse weather conditions. 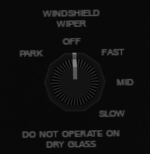 The windshield wipers operate on the secondary DC bus and are controlled by a knob (see Figure 1) on the upper console. The wipers have three speeds: slow, medium and fast. A position labeled PARK can be used to move the wiper to the up/vertical position to move it out of the way of the pilot's view. This position should be used momentarily before turning the wipers off to stow the wipers. The wipers should only be used on wet glass. 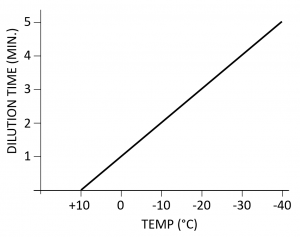 When a cold weather start (below 10C) is anticipated for the next start-up of the aircraft, the oil dilution system should be used during shutdown to mix fuel into the oil lines. This system will inject fuel into the oil system to reduce the oil viscosity making starting easier and reducing wear on the engine during cold-weather operations.

Use the following procedure:

When outside temperatures are 10C or below, and performing oil dilution on the previous shutdown was not performed, special cold-weather start procedures are recommended.

The PITOT HEAT switch on the overhead panel activates an electric heating element in the pitot tube. The heating element is powered by the primary DC bus. The PITOT HEAT should be turned on whenever the outside temperature is below 0C to prevent ice from forming on the pitot tube. An iced up pitot tube will render the airspeed indicator inoperable. Furthermore, and any additional functions depending on airspeed (e.g., the ASE) will also fail to function properly.

Carburetor heat is controlled through the carburetor air lever (see Figure 5) located on the left side of the engine control quadrant mounted on a console between the pilot and copilot seats. The lever has a white handle on the end and is marked CARBURETOR next to the lever. It is marked DIRECT at the forward end, and ALTERNATE at the aft end of the scale. The lever is used to provide heated air to the carburetor to prevent icing. In the DIRECT position, air is drawn directly through the air intake. As the lever is moved toward the ALTERNATE position, part of the intake air is redirected through a duct heated by the engine exhaust manifold. Use of carburetor heat may require increased throttle due to the lower density of the warm air entering the engine.

Clicking on the engine quadrant will bring up an overlay with scales for the mixture, carburetor heat and the starter and primer buttons. Carburetor air is controlled through the blue scale on the overlay.