Three cargo hooks (forward, mid and aft) are mounted on the belly of the aircraft for attaching external cargo. Each hook can be used to carry a separate load, in tandem configuration with the front and aft hooks, or in a triple hook configuration.

All hooks have normal and emergency release modes. Normal release is performed with hydraulic pressure from the utility hydraulic system and is activated by a release switch on the cyclic, or on the hoist HUD. Emergency list on all hooks is performed electrically off of the hot battery bus. 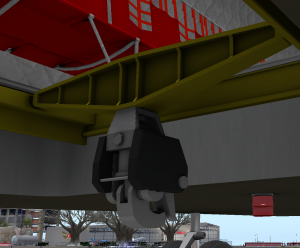 The middle cargo hook (see Figure 1) is positioned near the CG of the helicopter and is the ideal hook for larger single hook loads. The middle hook is mounted on a pivoting arm that swings up or down to allow the rsecue hatch door to be closed. The hook can also be removed to allow use of the rescue hoist system. Click the arm to swing it up or down. The middle hook will hide/show as necessary when the rescue winch is deployed or hidden. 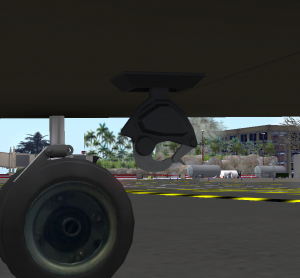 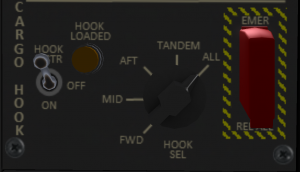 The forward (see Figure 2) and aft hooks are mounted on the centerline of the aircraft in front of and behind the rescue hatch. These hooks may be used independently, or together for tandem loads.

In addition to the control panel, there are three caution/alert panel lights that indicate when each hook is open.

1.5 Attaching Loads to the Hook

Loads are normally attached by ground personnel while the pilot maneuvers the helicopter over the load. Use the following procedure to attach the load.

1.6 Flying with a Hook Load

Once a load is attached, the load will drag on the ground in non-physical mode until cables have stretched to their hang distance. When picking up a load it is important to pick straight up until the load brakes contact with the ground and is hanging freely.

While flying with a load, the maximum allowed airspeed is 120 knots. It is also recommended to make sim crossings away from corners and as near to a right angle as possible.

The Chinook is packaged with a hook kit allowing you to build and share your own loads for the cargo hook system. The system is designed to offer a great deal of flexability in how you configure your loads. The prim components of the system are full perm, while the script is copy/transfer allowing you to share any loads you create. The primary prim components of a load are:

You can detach these from the built-in loads to create your own loads.

The Chinook hook system has three hooks that can be used in single attach, tandem (front and back), or triple hook modes. You load should include one, two or three hook loops depending on what type of attachment you want to use it with.

For each hook loop, you can include either one or two cables and anchors. Edit the anchor to its desired position on the load, and the hook loop to its "resting" position to were it will be returned when the loop is not attached to a hook, and not held by an avatar. The cables may be placed anywhere and will be automatically adjusted when the script is dropped onto the load or reset. Note that the root prim should be positioned so that is is "right side up" (i.e., rotation other than z-rotation is 0).

Once you have edited the anchors and loops where you want them, drop in the script, or reset the script if it is already installed (simply pull the script from one of the included loads). The cables will arrange themselves to attach between a loop and one or two anchors. The closest two anchors to each loop will be used.

Several menu options are available for loads. The load menu can only be accessed by the owner and is brought up by clicking on an anchor. Available options are: 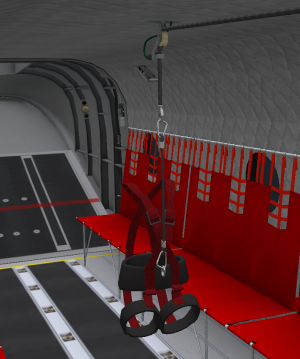 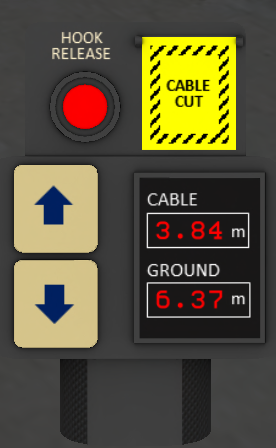 This helicopter is equipped with a hydraulically powered rescue hoist with a harness that can be used through the floor hatch in the center of the main cabin (see Figure 4). The hoist is located in the cabinet behind the pilot-side of the cockpit. When deployed for use, a combination of pulleys is used to route the cable over the hatch. The rescue harness is deployed and stowed by clicking the pulley, or pulley housing over the hatch.

In order to use the rescue hoist, the middle hook must be removed. Deploying the hoist will automatically hide the middle hook. While the harness may be deployed without opening the floor hatches, both hatches must be open to extend the hoist cable. Users are advised not to close the hatches while the cable is deployed through them to avoid damage to the cable.

The control panel (see Figure 5) for the hoist system is located on the overhead panel. Hydraulic and AC power must be available to use the hoist. To use the system, move the HOIST MSTR switch to the ON position. The hoist can then be controlled using the HOIST rocker switch with OUT, OFF and IN positions. The switch is spring loaded to the OFF position and must be held in place to let the cable out or in.

The control panel also has a guarded cable cutter switch that will cut the hoist cable. This may be used in if the cable becomes entangled or emergency conditions. Note that the safety of any occupants of the harness when the cable is cut is not guaranteed.

The hoist may also be controlled through a HUD (see Figure 6) by anyone sitting in the helicopter or in the harness. The HOIST MSTR in the cockpit must be on to operate the HUD. The HUD includes buttons to raise and lower the harness, as well as a readout showing the helicopter height and the amount of cable payed out. A guarded cable cut button is also provided. In addition to the hoist controls, the hoist HUD also includes a release button for the hook system.

The following chat commands are supported for the hoist and hook systems: